“Aaron shares his journey as a consumer of music, the importance of Spotify in his listening experience, and how he took awhile to fall in love with The Beatles’ White Album.”

Leigh Lim: Hi Aaron, thanks for taking the time to do a Q&A! Looking through the different categories on your blog, I noticed that there isn’t a separate category for music. Does that mean that music is so much a part of you, it would be rare not to talk about it?

Aaron Strout: Leigh – Music is a passion for me. But really only as a consumer. I am an avid listener of new music (thank you Spotify!), consumer of live music and I love to share what I’m learning with others. However, I haven’t ever translated that into writing about music. I reserve that for mostly professional areas like mobile/location-based marketing/social/digital.

LL: How has your music tastes changed through the years?

AS: The first albums I ever remember listening to (this is in the mid-70’s) are the Beatles, Cream, Paul Simon and Led Zeppelin. My dad was an appreciator of good music so I came into this world listening to some great bands.

As I moved into my teen years, I moved from Van Halen, The Doors and The Kinks into early Rap (Grandmaster Flash and the Furious Five, Run DMC and the like). That morphed into bands like Bon Jovi, Rush and others early days of college. Like many others, I then went through phases of dance music (Nina Cherry, Rob Bass, Digital Underground), Grateful Dead and then alternative (Cure, Smiths, Sinead O’Connor and Living Color).

LL: Artists that you loved from first listen, until now?

LL: Are there certain albums (or tracks) you avoid listening to because of nostalgia?

AS: There aren’t really any but Prince’s Purple Rain was that way for a while. I’m over it.

LL: Do you make it a point to catch live music (as it is being played/recorded) regularly? (or do you prefer attending ticketed events — or go for archive convert providers like wolfgangsvault.com)

AS: Probably more of the first two. And to contradict a little of what I said earlier, we have a video show called Live from Stubbs. We are starting to push harder into music and actually did an interview and recorded four live songs with the band, Lord Huron.

LL: What’s are your most listened to tracks?

AS: I keep an ongoing list on Spotify at any given time. My current one is called “Run Boy Run.” Three songs on that list that are earworms for me are Gin Wigmore’s Black Sheep, Manchester Orchestra’s, Top Notch and Wolf Alice’s Moaning Lisa Smile. Red Hot Chili Peppers, Black Keys and White Stripes are go-to artists for me on any given occasion.

LL: Does having an online playlist help a lot?

AS: Yes. I live by my online playlists. I have two that I listen to regularly – one that is a go to called “House List” – this is what I run to. The other is my collection of what I am listening to. A mixture of recommendations from friends, things I’ve Shazam-ed and such. Run Boy Run

LL: Albums that took you awhile to fall in love with?

AS: Hmmm… The Beatle’s White Album comes to mind. It’s esoteric so it took a while to grasp. Now it’s one of my favorites.

LL: Have you travelled to a specific area just to catch a performance?

AS: Sort of on one — my wife and I planned a trip to Portugal to visit friends but we specifically timed it to coincide with the 500th anniversary of Lisbon. The band, Morphine, was playing. I had never seen them live. It was ironically one of their last performances before lead singer, Mark Sandman, died. The other which was in the U.S. was Rage Against the Machine. I travelled by myself to LA Coliseum to see them perform with Muse, Rise Against and Lauryn Hill. It was an epic show. 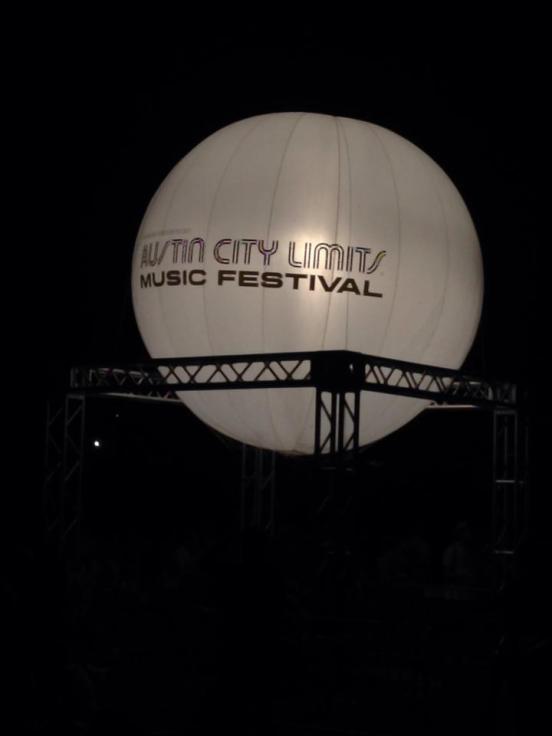 AS: Because of Spotify and Pandora, I don’t actually buy much music now (I do subscribe to the premium version of Spotify). Once in a while if I want to support a particular local artist/friend OR in certain cases like Tool and AC/DC who don’t make their music available via Spotify, I will go in and buy entire albums off of iTunes.

LL: Are you also intentionally going for digital rather than physical copies?

AS: Yes. I really only do digital/streaming these days. It’s more because I travel so much and move around a lot when listening to music.

LL: Would you watch documentaries related to the music you listen to?

AS: Yes. Love the documentary called “It Might Get Loud” which is a movie about Jimmy Page of Led Zeppelin, The Edge of U2 and Jack White. I also have a copy of Dave Grohl’s Sound City but haven’t watched it yet.

LL: Do you bring music while you are out and about?

AS: Yes. I have it on my iPhone. I also have the house wired but also have a mobile Bose speaker. Music is with me wherever I go.

LL: Do you try to avoid listening to music via headphones or earbuds — and as much as possible in a way that you can share it with others around you?

AS: It’s a mix. Plane and office time is strictly earbuds. At home, it’s all speakers!

LL: Did it take awhile for you to decide which ones to put at home? (speakers, amplifiers…etc)

AS: We moved into a house that was already wired. So no, I didn’t spend much time on speakers/amplifiers. But I do have an awesome mobile Bose speaker that my friend, Jason Keath, gave to me. I also use Sonos via my home stereo. That allows my kids and me to DJ off our phones when we are at home.

LL: A music purchase you regret you didn’t make?

AS: I wish I bought more original physical albums like Nirvana’s Nevermind and Alice in Chain’s Dirt. Beyond that, probably not.

AS: My first CD player from my parents in 1989. It changed music for me forever.

AS: My oldest daughter turned me onto Bad Suns. She also is exploring a lot of new music so she is keeping me current. Truth be told, I ask from time to time on Facebook for new music recommendations and that’s where I get a lot of my new music.

Those three songs I mentioned above are from my Facebook requests. My friend, Kyle Flaherty, and I share musical tastes so he turns me onto new stuff from time to time like the Bands Hozier and Broken Bells. To that end, I go to Austin City Limits Music Festival every year. That is also a big driver of new music for me.

LL: Do you still listen to radio?

AS: I do. I listen in the car about 50% of the time. I have a pop station, alternative, classic rock and modern rock station that I usually hit up. I actually Shazam those regularly to get new music choices (not so much the classic rock station).

LL: While you were writing your book, did you listen to specific albums? (or did you have a specific playlist going to keep you writing consistently — and to keep you in the ‘zone’ as much as possible?

AS: Mostly chill music. Stuff like Massive Attack, Norah Jones and the like. I definitely can’t listen to heavier stuff when I write.

LL: Do you prefer smaller venues (with as little amplification as possible) than stadium type ones? (for live performances)

AS: Yes. Not so much for the “as little amplification as possible” but more for the intimacy piece. I also find that that bigger stadiums tend to be more cookie cutter and harder for the crowd to get into the show. 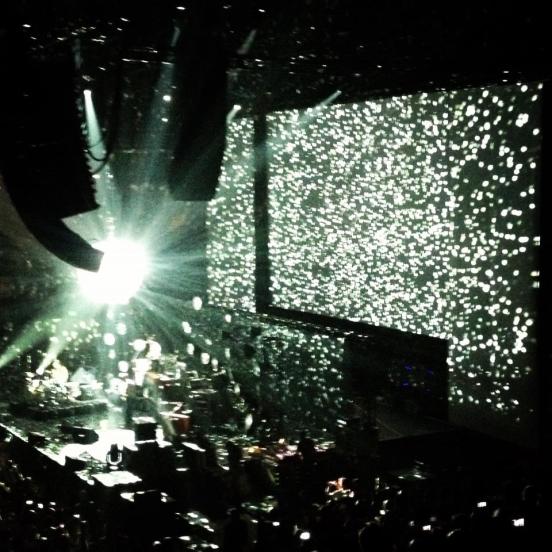 LL: Do you have a favourite live album?

AS: First would be U2’s Under a Blood Red Sky. Second is Nirvana’s Unplugged. AIC’s Unplugged is also awesome. Regarding Youtube, there is a version of Graffiti 6’s “Stare Into the Sun” that is acoustic and AWESOME!

LL: Is knowing the song’s lyrics important to you?

AS: Sometimes yes. If the song is meaningful to me. But I can get into the soul of a song even without knowing the lyrics.

LL: Aside from music, are there certain things you ‘geek out’ about?

AS: My kids, Boston Sports, Barbecue, photography… to name a few.

Aaron’s daughters (oldest and youngest) in front of the “I Love You” wall in Austin. They both LOVE music and are an inspiration to Aaron.
Photo: Aaron Strout

LL: Do you get drawn in by various other forms of art?

AS: Definitely photography. And usually it’s the reverse, I see visions of certain things/scenes when I am listening to certain songs. For Sarah McLachlan, there is a song called “Fear” on her Fumbling Toward Ecstasy Album. Every time I hear it all I can envision is a cool second floor room at sunset with the windows open and white sheers gently billowing. Not sure why but it is a very clear visual.

LL: Do you go out of your way to discover new things?

AS: Yes. Food, books, places to travel to.

LL: Where do you go for inspiration?

AS: I rely pretty heavily on my social channels. But often, going for a long drive or a long run can help me clear my head and give me perspective.

LL: What makes you smile?

AS: I love all three of my children to death but my seven year old daughter says things sometimes that I just can’t help but smile. The things she says come completely out of left field sometimes. My other go to is the line from Good Will Hunting where Will asks one of the Harvard Student’s if he likes apples. The student (on the other side of a restaurant window) shrugs and says “yeah?” Will says, “I got her number (Skyler), how d’ya like them apples?!?” Not sure why but I love that line.

AS: Embraced it early on (2006) and have never looked back. Surprised actually when others don’t embrace it.

LL: What are your favourite sites at the moment?

AS: Medium is pretty cool from a blogging perspective. Otherwise, I bounce around a lot thanks to Facebook and Twitter.

LL: What would you do when you need cheering up?

AS: A little Jack White or Skrillex always get me going when I’m down.

LL: What has been the most memorable time a band connected to you?

AS: The day that Chris Cornell tweeted me was a major highlight. I’ve always been a huge Soundgarden fan.

@AaronStrout Its not weird, its a good thing

LL: What makes your soul sing?

AS: Running. Spending a night out on the town with my wife. Austin City Limits Music Festival.

LL: What do you find is the best way to connect with your circle?

* Aaron Strout is based in Austin and the Managing Director of WCG. You can find more about his book here, his entries here, and Tweets here .

Source Material and Notes: The material posted is based on correspondence (October-November 2014) between Aaron and Leigh. Content has been edited for length, and the final version has been reviewed and approved by the interviewee.

a musician based at Sydney. You can find a sample of her music here. To reach out to Leigh, you can do so via this form or a direct message through YouTube. (Curious to find out if she’s your kind of person? You can check out her tweets and personal entries.)

Want to start a conversation unrelated to the Q&A? That’s okay too! Just use the first form below. 😀

** For feedback and comments that you wouldn’t mind displayed publicly, you can use the ‘leave a comment link’ below.